I’m so hyped for Khans, I’m going to start this post with my top 5 hyped Khans cards for my cube: 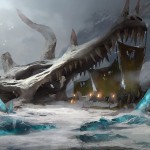 Over the years spent refining the KaleidoCube, I’ve found the shards and wedges to be especially awkward to manage. In Constructed, hitting a Sprouting Thrinax or Sedraxis Specter on turn 3 wasn’t really an issue since you could run playsets of dual lands and tri lands to your heart’s content. It’s a little different in cube because your drafters are all scrabbling for singletons of multicolour-producing lands. Even in my cube, in which I’ve included a disproportionate number of multicolour lands, consistently hitting XYZ on turn 3 is not a firm reality, and my drafters value shard/wedge cards lower because of this (except the one player who consistently takes Cruel Ultimatum no matter what – you know who you are).

Even with the reduced power level of my cube compared to other cubes, CMC 3 cards costing XYZ are a luxury most players cannot afford to draft highly. None are really good enough to draft early over, say, a mana fixer or a sweeper, and so they are usually drafted late, or in the worst cases, not at all. I’ve found only the Woolly Thoctars and Rhox War Monks, the cards with massive upside, are even worth the effort. Charms have to provide enough utility or “punch” to be worth maindecking. Providing three sideboard-specific effects doesn’t really cut it.

The silver lining to the tricolour section is that I don’t feel beholden to adhere to strictly equal portions, because they will influence the construction of someone’s draft deck much less than guild cards. Some combinations, such as Jund, are clearly deeper than others, and so I don’t feel terrible about giving those deeper shards/wedges a little more room to play. It’s about giving people the cards they want to play.

(SIDENOTE: I’ve especially found 1XYZ cost cards to be even more awkward to cast and play. The extra turn up from 3 gives the player more time to hit all three colours, but oftentimes the cards are far below the expected power level in comparison to the hoops you have to jump to cast them. Even when you have a mana dork, mana ramp spell or Signet on turn 2, there are few of these cards worth powering out opposed to a 2XY spell like Falkenrath Aristocrat or Loxodon Hierarch. Or Huntmaster of the Fells. Or Exava. You get the picture.)

In a perfect world for my cube, aggro, control and midrange would all be equally viable to play and comparable in power to one another. Aggro, however, requires low-casting cards, and the multicolour ones are just simply harder to play early on. I think once I solve the problem of mana fixing for aggro without incidentally making control even stronger by offering them the same fixing, I think I’ll have hit a happy medium.